Winding Down...and it's a good thing 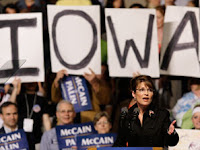 Last 20 days or so crazed GOP power hungry men (mostly men) want to deal with no pot to ____ in. Young Guns was truly a bad concept. No guns and not even youthfulness from GOP men.*

I notice that Sarah Palin just looks straight ahead without reaching down to swat a few of these guys long side their heads. She asked everyone to work together but she still got dumb bull-headedness from Karl Rove and Charlie Krauthammer.

The tea party movement types are still trying to insert new stupid ideas into their campaign blurbs and interviews (as Riehl World pointed out) and it is a good thing no one is paying much attention to them. Say some more than that and all the Lame Stream Media owned by the parent company called OBAMANISM INC. will attack you .Say a few good things. Watch as you polls climb and then go and shake some hands in your district or state. Kiss a few babies and sign your name to some hats and tee shirts but otherwise behave. Do not go and pick fist fights with some ugly news reporter or photographer. Can't you remember Alec Baldwin swing at the wind and camera?

I wrote a note to Ann Buerkle from 26th in New York State to tell her. NO ONE NOT A SOUL in these parts knows who the "YOUNG GUNS" are so why was she touting their endorsement? She had Sarah Palin's endorsement ...one of the few lucky ones. The RNC or the NYGOP must have told her to nix Sarah.
Anyway, Tea Partiers are getting some experience. They have found out that it takes stamina and something intelligent (see Hoffman from NY 23)to say from day one to the final days.
*Dan Riehl from Riehl World ----
Posted by MLWELZ at 3:10 PM