Palin and Bachmann Campaign In Minnesota 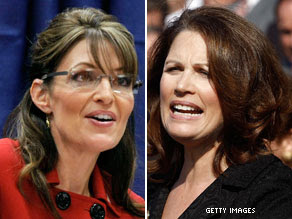 Governor Palin and Representative Michele Bachmann (R Minn) will campaign together on April 7,2010. A "Money Bomb " will be needed by Bachmann as she faces strong union support for her opponents.
Representative Bachmann has a friend and colleague much more important than fuddy duddy old man and his rants. Arlen Spectacle needs to learn how to share ideas with women instead of ranting at them. Spectacle represents the finest in Democrat Socialist Chauvinistic Pigs. He is way behind in his own re-election campaign. Can you wonder why? He pulled this same kind of rant on Laura Ingraham on her show. It was pretty embarrassing to hear the first time.